Parents of Bubulo Girls in Manafwa district have petitioned the leadership of Church of Uganda over the continued leasing of land by school board members and officials of Mbale Diocese.

In a letter to the Archbishop of Church of  Uganda, the parents protest what they call illegal by a section of board members and church officials to lease seven acres to private investors at the expense of the school.

Bubulo Girls High School is one of the Church of Uganda traditional founded school in Manafwa which was formerly part of the greater Mbale district. The land under contestion was a donation from the community to the church.

“Having been successful with the first transaction of land lease which is said to have been blessed by the diocesan council, board devised another resolution to have about seven acres of land leased out and a notice was published and is hereby attached. We find this incoherent, hilarious and intriguing”.Ms Annette Webombesa an old student of the school wrote.

Below is the letter in full

The above refers. We have been saddened with the manner to which Bubulo Girls High School (BGHS) land has been leased out. BGHS is a traditional church owned school in Manafwa district, Manafwa town council that has produced people of stature and status to the nation and internationally. With the construction of Lwakhakha road, the school was compensated by UNRA with Shs150 million which was taken by Mbale Diocese in lump sum to which we have no complaint.

It is important to also bring to your attention that the school enrollment is at its record lowest ever as the board is full of land brokers and investors than people with heart for school growth.
In the process of road construction, about three quarter acre of the school land was separated from the main school land. In the school board resolution to which we are not privy to, this part was leased out for 49 yrs at Shs90 million without advert, bidding or notice to the public under pretext that it was private land. This did not only ogre well but also cost the church money that would have resulted from the open and competitive bidding but also lack of transparency from an institution with a name to protect like Church of Uganda casts doubt and leaves room for criticism . One asks why the PPDA act processes and procedures were not borrowed and followed.

Having been successful with the first transaction of land lease which is said to have been blessed by the diocesan council, board devised another resolution to have about seven acres of land leased out and a notice was published and is hereby attached. We find this incoherent, hilarious and intriguing.
The speed at which board is leasing out school land has shocked, annoyed and caused public outcry. It is like there is no tomorrow. Successful bidders are not restricted on the type of business buildings to be put up. We therefore expect bars, lodges, betting houses, night clubs on church land. How do this activities bond with school activities? This is happening when local government has over 150 acres of land not yet distributed for development in the town council but rather it is the BGHS board much more interested in seeing development in the town council which has not yet attracted investors due to low return on investments. It is possible that the plots are going to be leased out or divided amongst some people picked by the board and shall take years to be developed hence incomplete structures acting as hideout for criminals who shall cause havoc and mayhem to our children on the school. The trajectory of things is not pleasing at all. 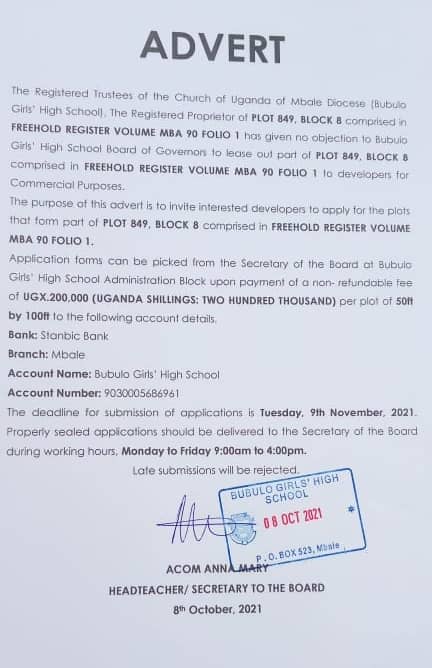 Let it be known to you that the chairman board is a synod member and head of finance at the diocese. The neutrality of the process at the diocesan council is not only questionable but highly doubted if it was without influence. Be as it may, the chairman board is a senior civil servant with Manafwa district local government audit department. The audit department at district level do audit government aided schools not only for proper use of funds but also ensuring that the set internal controls are adhered to and also check compliance and governance issues. Now how can one rule out conflict of interest in all these matters.
People who have rushed to take up the plots are those who have never had a child on the school or have denied their children from joining BGHS and are hence being rewarded for that. It is highly possible that formalisation of the already illegally leased out land may be undergoing to preempt this noble complaint.
On the basis of the above, we humbly demand as here under;
1. That the leasing process be halted till your respected office looks into this matter comprehensively.
2. That the church interests itself in monies so far received and how it was utilised.
3. Clarification is sought from your respected office as to how church land is leased and or sold to third parties. What is the role of House of Bishops in this?
4. That Church of Uganda protects it’s image and shows public that trustees of church property do hold it so for the Christians of Church of Uganda.
5. That the chairman board roles be assessed, investigated and where conflict of interest is presumed, he relinquishes board chair position .
6. That heinous acts executed in the leasing out of land to third parties if breached the norms, laws and canons of Church of Uganda, board be held responsible for the mess in its entirety.
7. That Church of Uganda pronounces it’s position on this matter to stop unnecessary anxiety, quarrels, conflicts and or fights. There is a lot of uncertainty and the community is in a precarious state.
We trust you will stand with the community to ensure that the images of the school and of Church of Uganda are protected by nullifying the sham transactions as above stated. Projects that mushroom during evening hours of term of office have in most cases proved suspect. Find attached photos of the leased out land.