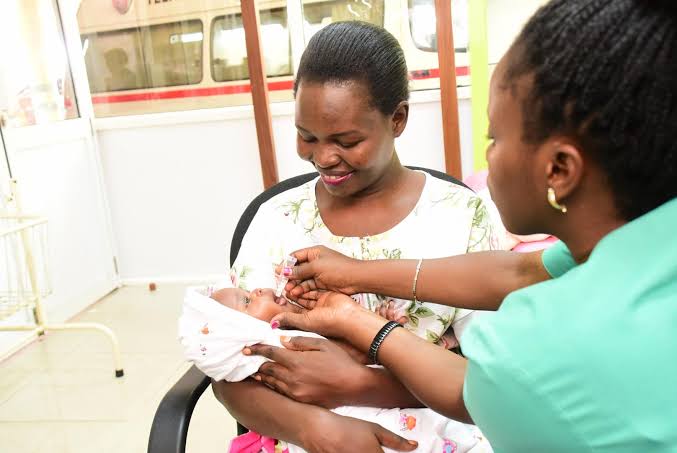 The Ministry of Health has said it is set to immunise over 8 million children below the age of five against Polio.

The exercise will be conducted door-to-door countrywide from January 14th to 16th. About 8.8 million children under five will be vaccinated with novel oral polio vaccines (nOPV2).

“The National House-to-House Polio Immunization Campaign will be launched today in Wakiso District. I appeal to all parents and caretakers to ensure that all children under 5 years receive their Polio Vaccine during this exercise,” Health minister Dr. Jane Ruth Aceng said.

Last August, Uganda announced that there was a polio outbreak in the country after samples on fecal matter collected in the capital Kampala tested positive. The ministry of health warned at the time that it was the rare wild polio virus type 2, whose vaccine was withdrawn from the country’s routine immunization exercises in 2016.

The virus type, according to the ministry, is the most virulent of the three types, 1, 2, and 3. The resurgence was attributed to the reduced routine immunization in the country due to the COVID-19 pandemic.

Uganda was certified polio-free in October 2006 by the World Health Organization (WHO) after having reported no indigenous polio cases for 10 years.

The ministry urged efforts to ensure that all children are vaccinated against polio saying vaccinated children will be marked and their households numbered.

According to the World Health Organisation, polio is a highly infectious disease caused by a virus that mainly affects children under five years old.