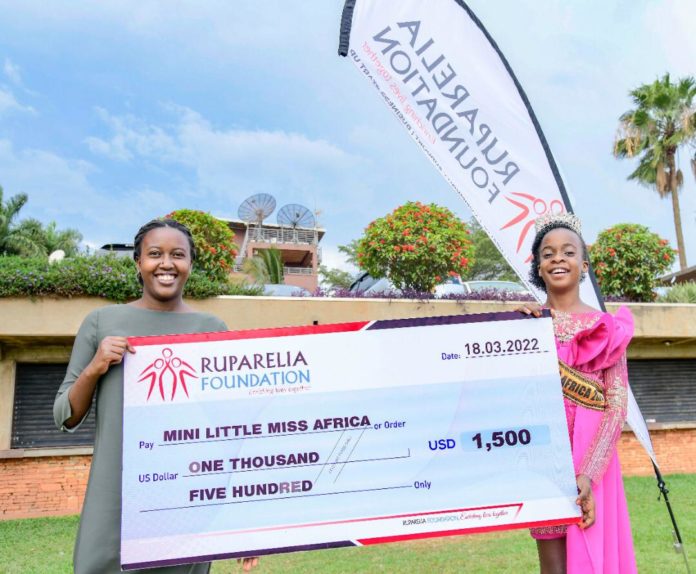 Mini Little Miss Africa Tyra Abok is preparing to take over the fashion world with the support of the Ruparelia Foundation donating up to 1500 dollars (approx. Shs 5.4 million) as she plans to travel to Dubai to represent Uganda in the Little Miss United World Beauty Pageant.

She’s passionate about children’s rights, a cause she’s an advocate for. She often uses her social platforms to voice her thoughts on child abuse and other challenges children face.

Tyra is a promising young talent who has made great strides in the fashion industry by bagging a couple of awards.

The Ruparelia Foundation has a strong position as a pioneer in supporting young talents in bettering their future, with the likes of Fresh Kid, Felister the superstar among others who have benefited from the Foundation’s support.

According to Nuwasasira Isabella from Ruparelia Foundation, Tyra Abok has an exceptional talent who poses an opportunity in future to become an ambassador to the Ruperalia Group both locally and internationally.

“It will also be a good opportunity for the Foundation to help her put Uganda on the map by supporting her Miss World fashion ventures as she goes to Dubai to represent Uganda in the Little Miss United World. It should be noted this would be a unique venture for the Ruparelia foundation and the first one of its kind,” said Isabella.

She added; “Her being an advocate of children’s rights and other challenges children faces, her ideologies are well aligned with the Ruparelia Foundation’s objectives and its something the foundation can put its weight on and support.”

The Ruparelia Foundation was founded in 2012 by Dr. Sudhir & Mrs. Jyotsna Ruparelia and runs its programs under the catchphrase theme: “Enriching Lives Together”.

For the past ten years, the Foundation has worked together with several stakeholders to champion positive change in different communities across the country to improve livelihoods in Uganda.

To date, more than 700 charitable causes have been funded by the charity.

Ruparelia Foundation strives to create a positive and transformative change in the community through making a real difference in the present day but also have a sustainable plan for every initiative carried out.