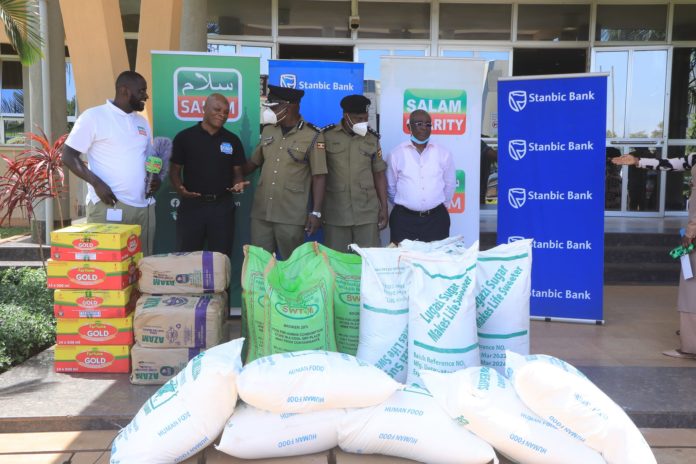 Stanbic Bank in collaboration with Salaam Charity Foundation have joined hands and donated “Iftar” to Police Muslim fraternity as part of their Corporate Social Responsibility (CSR).

The items donated include, Sugar, rice, cooking oil, baking flour and Maize flour.  These will enable Muslims in the force easily breaking their fast during this holly month of Ramadhan.

Stanbic Bank regional manager, Haji Ali Lwanga who handed over the items to Police felt privileged with the giveback to police which provides security especially during night prayers (Taraweeh).

“We appreciate the role played by the Police in providing security especially during night prayers (Taraweh). It’s a month of fasting and we are privileged to give and share with the Muslim fraternity in Uganda Police to assist in breaking their fast,” Ali said.

He was flanked by Hajji Haruna Mubiru, the General Manager Salaam Charity Foundation.

“We appreciate Salaam Charity and Stanbic Bank for these donations to our officers. We shall distribute them within the Muslim community of Naguru and Nsambya mosques to help them break their fast,” Basalirwa remarked.

The eventful ceremony took place at police headquarters in Naguru on Monday afternoon, 11th April 2022. The timely development surfaces on the day the Muslim fraternity climax the first ten days of the holy month of Ramadhan.