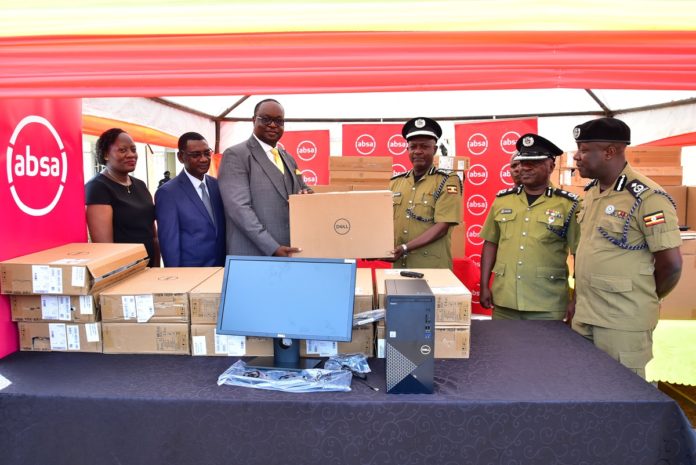 Absa Bank Uganda has today committed to donate IT equipment worth Shs131 million to the Uganda Police Training School at Kabalye, Masindi.

The donation will include 10 laptops, 60 desktops, a projector and internet connection for the school’s resource center.

The announcement was made by the bank’s senior leadership during a ceremony attended by senior members of the Uganda Police Force. In this first phase, the bank has handed over 23 computers worth Shs 54 million shillings.

Speaking during the ceremony, Mumba Kalifungwa, Absa Bank Uganda’s Managing Director, said, “The world is moving towards a deepening digital ecosystem, which has made it critical for every aspect of our society to adapt to this growing trend. Thus, in pursuit of our purpose to be a force for good, the bank is committed to facilitate education and skills development as well as promoting a just society by supporting efforts to increase the efficiency of public institutions, such as the Uganda Police Force.”

The donation comes at a time when the Force has accelerated efforts to integrate ICT into fighting crime, which has been done primarily through the first phase of over 3,000 cameras being stationed around Kampala Metropolitan and Wakiso District and a second phase being extended to cities across the country.

Speaking during the release of the 2020 Annual Crime Report, the Inspector General of Police, John Martins Okoth Ochola, said that as the country evolves and grows in science and technology, the Force needs to take on roles that reflect these changing values and expectations, which requires constant training and equipping of police personnel with advanced knowledge and the tools to fight crime.

While receiving the donation from Absa, the Deputy Inspector General of Police, Major General Kasigazi Tumusiime said,” The Uganda Police is committed to prioritising professionalism as we pursue our duty of ensuring safety and security of Ugandans. We will continue to harness the use of technology and increase the capacity of our human resources to integrate ICT in the execution of their duties, and I appreciate Absa Bank Uganda for joining us on this journey.”

“Absa Bank Uganda leverages its digitally forward ambition by investing in technology platforms that support the improved delivery of social services. Supporting the Uganda Police Training School ensures that new recruits in the force are adequately trained and ready to serve the nation. This is one of the many ways through which we are creating value and play a shaping role in Uganda’s growth and sustainability,” he concluded.