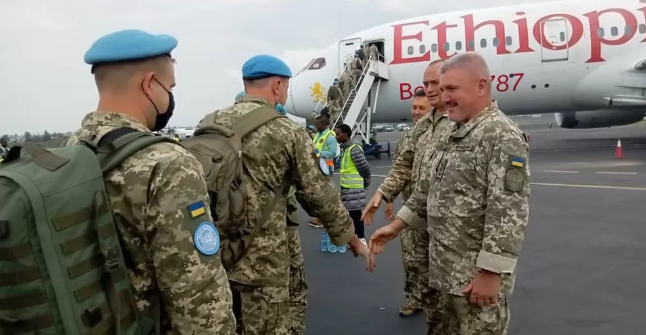 The 250 Ukrainian troops with the UN peacekeeping mission in the Democratic Republic of Congo have returned home to help fight Russian forces.

When the withdrawal of Ukraine’s aviation unit was announced in March, diplomats warned it could leave the UN mission seriously short of helicopters.

These are vital in the fight against the various rebel groups based in the thick forests of eastern DR Congo.

The eight Ukrainian helicopters made up about a third of the UN fleet.

Since the Russian invasion in February, Ukraine had already pulled out its troops from the other UN peacekeeping mission where they had been deployed.

Jacques Ndjoli, who serves on DR Congo’s parliamentary defence committee, told the BBC the withdrawal was relatively serious, however he pointed out that bringing peace to the country was primarily the responsibility of the Congolese army.

As the Ukrainians left DR Congo, the Brazilian commander of the UN force, Gen Marcos da Costa, said “their 10 years of immense contribution” was greatly appreciated.

The UN mission in DR Congo, Monusco, is already under pressure in the country.

It is widely criticised for failing to do enough to restore peace in the east, where numerous armed groups have operated for three decades, killing, raping and looting the region’s rich minerals resources such as gold and diamonds.

After 22 years in the country, the mission is supposed to be winding down but no date has been set for its operations to end.

It is one of the largest and most expensive of the UN’s 12 peacekeeping missions.