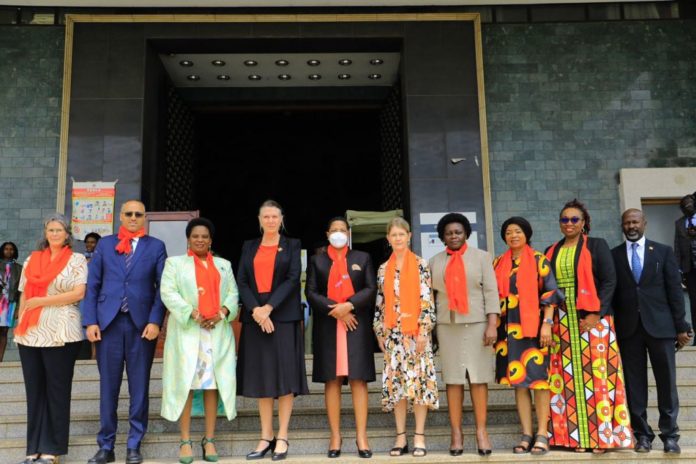 The Parliament in partnership with Uganda Women Parliamentarians Association (UWOPA), UN Women, United Nations Population Fund and the embassies of Netherlands and Sweden on Wednesday launched the  annual international campaign dubbed, ‘16 Days of Activism against Gender-Based Violence (GBV)’ with an appeal to involve men in programmes aimed at eliminating Gender based violence

Speaking at the launch, Speaker Anita Among said that Gender-Based Violence had become ‘a persistent virus’ that calls for an amalgamated effort to defeat it.

She, however, noted that although Parliament has passed legislation aimed at eliminating ‘the virus’, implementation has remained poor due to budgetary constraints.

“As Parliament, we need to ensure that the laws on GBV elimination must be budgeted for, it is one thing to pass a law and another to have it implemented,” said Speaker Among.

The laws include, the Prohibition of Female Genital Mutilation Act, 2010, the Domestic Violence Act, 2010 and Prevention of Trafficking in Persons Act, 2009.

The Speaker was concerned that the population is not aware about the laws addressing Gender-Based Violence and charged the Ministry of Gender, Labour and Social Development to popularise the existing laws during the campaign.

The Minister of Gender, Labour and Social Development, Betty Amongi, said the campaign which commences on 25 December 2022, will focus on tackling GBV at household level, cognisant that many cases happen in homes.

“We know fathers, brothers and other relatives who have defiled their daughters and sisters. We are seeing many in the media. We therefore want to start with homes,” said the minister.

She added: “Violent homes can easily affect girls from pursuing education – a girl will be forced to run away from her violent home into early marriage.”

Minister Amongi said there was a growing trend of violence among couples which the campaign hopes to address. She cited the 2021 Uganda Bureau of Statistics report which puts intimate partner sexual violence prevalence at 36 per cent and physical violence among women at 47 per cent.

Legislators during the plenary sitting after the launch, tasked the minister to conduct the campaign activities in rural areas as opposed to the cities, saying GBV cases are more prevalent in rural areas.

“Sensitisation activities seem to be at the upper strata of our society yet GBV is mostly in the rural area, can I be told what activity is there in Dokolo so that I can be part of that rural woman who is being abused, who does not know the legal framework to defend her?” asked Cecilia Ogwal, Woman Rep., Dokolo District.

MPs re-emphasised the Speaker’s plea to empower boy children, who they said, have been neglected.

“We are putting much emphasis on girl children and our boys are going astray. If you go to the villages, the roles that men used to play have been relegated to women; it’s women who pay school fees and take care of homes,” said Kole South County MP Peter Ocen.

Bukomansimbi MP Godfrey Kayemba said: “Boys grow up but they are not empowered and that is why boys have complicated hearts and acts. I have a friend in my constituency who was beaten by his woman and when he went to the Police, they just laughed at him”.

“The action report from the Ministry of Justice and Constitutional Affairs shows the conviction rate of rape perpetrators in the last one year at five per cent, that means it could take almost 20 years to convict a rape perpetrator,” said Kole North County MP Samuel Opio.

He added: “Many of these cases ‘die’ at the Police station and fail to proceed through the justice system to the prosecution.”