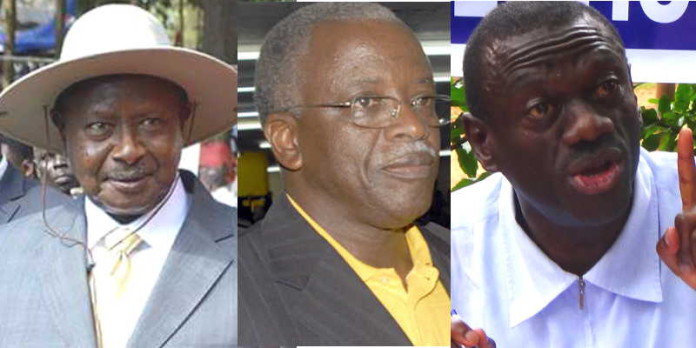 Politicians from the greater Ankole and Kigezi regions have provided the biggest number of those vying for the presidency in 2016.

The six contestants from the western region are expected to be joined in the race for Uganda’s topmost office by Democratic Party’s Norbert Mao and Uganda People’s Congress Jimmy Akena.

But there is a Catch 22 situation that might scuttle the ambitions of some aspirants: the Presidential Elections Act 2005.

According to the PEA, a presidential candidate is required to collect 100 signatures from voters backing their candidature from two thirds of the districts in Uganda.

And today Mbabazi, a former Secretary General of the ruling National Resistance Movement (NRM), was accompanied by his wife Jacqueline to pick nomination forms for the 2016 Presidential Elections from the Jinja Road-based Electoral Commission.

A former confidant of President Museveni, the man from Kanungu has said he will run as an Independent candidate, after he failed to secure endorsement from the NRM.

“According to the Ugandan law, any person is free to contest as an Independent and I belong to that category,” Mbabazi was quoted as saying.

The second person to pick the nomination forms today was Prof Baryamureeba, who is also contesting as an Independent.

According to Prof Barya, as he is fondly called, he doesn’t expect a run-off. “I am standing as an Independent and I expect to win with a very huge margin in round one,” said the man who hails from Ibanda district, in the greater Ankole region.

Prof Barya however, acknowledges incumbent Museveni still has strong political credentials. “He is loved by many but this does not take away the fact that he is old. I respect him and if I win, I will let him retire peacefully at Rwakitura,” Baryamureba promised.

He also denied being part of The Democratic Alliance (TDA) claiming that the coalition has failed to present contestants at all levels and also doubts if the Alliance will be able to field a candidate at the presidential level.

The other person who has picked the nomination forms is a retired soldier, Maj Gen Benon Biraro, who also seeks to run as an Independent.  General Biraro hails from Isingiro District in the greater Ankole region.

President Yoweri Kaguta Museveni, who was returned unopposed in the National Resistance Movement (NRM), is also from the greater Ankole region.

But for some Ugandan political minds with ‘region-of-origin’ lenses, the most exciting contest is that of the FDC flag bearer that has pitted one contender, Maj Gen Muntu from the greater Ankole against a colleague, Dr Besigye from the greater Kigezi region.

The two FDC heavyweights are currently criss-crossing the country, convincing voters to elect one of them as the flag bearer of the biggest opposition party.

Meanwhile, the Electoral Commission has set October 5 and 6 as the days for the nomination of presidential candidates, who are all supposed to pay a non-refundable fee of eight million shillings on picking the nomination forms and then return them filled by September 21.