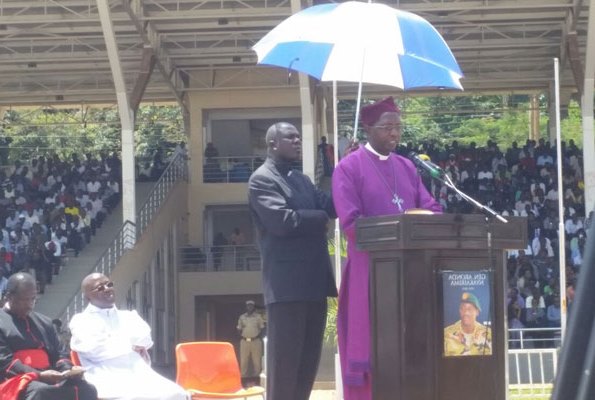 The Archbishop of the Church of Uganda Stanley Ntagali has called upon leaders to emulate the exemplary leadership exhibited by the former Internal Affairs Minister General Aronda Nyakairima.

Addressing mourners attending a memorial service held at Kololo Ceremonial Grounds in honour of Gen Aronda, the Archbishop said he knew the deceased as a man of integrity, God fearing and humble.

“For the time I have known Aronda, his name has never been mentioned in any corruption scandal and we must thank God for that,” he said and advised leaders not indulge in corrupt tendencies but use their offices to serve the people.

He also consoled the family of the deceased especially the widow Linda Aronda.

“Linda, in Aronda you got a good husband and it is unfortunate that he has gone too soon,” the Archbishop said adding: “You made a vow to stand with him in good and bad and this there is no doubt you have done this to your best.”

Taking a jibe at the forthcoming elections, Ntagali urged politicians not bribe voters and also advised the voters not to allow to be bribed but vote basing on issues that affect them.

“Do not be cheap to be bought but rather vote leaders on merit,” he counseled before imploring the clergy to be impartial.

“Now is the time to make Uganda better,” he said.