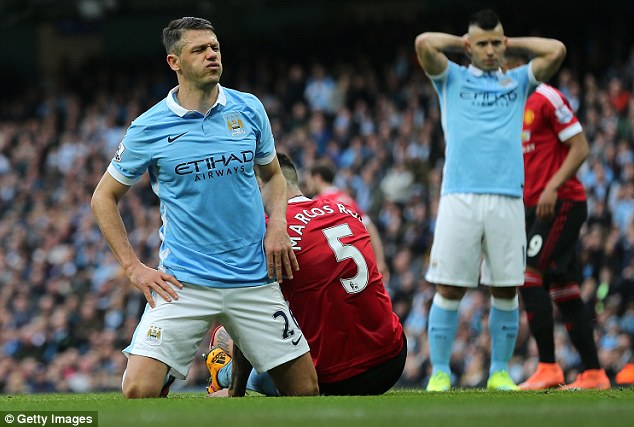 Martin Demichelis has been charged by the FA for betting on football matches earlier this year.

The Manchester City defender is alleged to have committed 12 breaches of the rules over the course of a week in January.

A statement by the FA said Demichelis’ betting on matches between January 22-28 brought the charges.

The FA rules also state that comes ‘either directly or indirectly, or instruct, permit, cause or enable any person to bet on any result, progress or conduct of a match’.

Demichelis played for City during their 2-2 draw away at West Ham United on January 23. The Argentine was booked by referee Craig Pawson. There was a full Premier League programme that weekend but there is no suggestion Demichelis is alleged to have placed money upon any of those fixtures.

Or the two Capital One Cup semi-finals that week, as City brushed aside Everton 3-1 on the Wednesday after Liverpool had squeezed past Stoke City the night before.

Stoke had beaten the Reds 1-0 at Anfield but Jurgen Klopp’s side prevailed on penalties.

The FA rules, which were tightened ahead of last season, also clamp down on betting involving ‘any other matter concerning or related to any club participating in any league competition’. That involves the transfer of players, employment of managers, team selection or disciplinary matters.

Demichelis has until 5pm on April 5 to respond to the charge.