And it goes without saying that Ugandans on twitter are not going to stand with the former Vice President in her quest to replace African Union Commission head Nkosazana Dlamini-Zuma due to her ‘outrageous’ past.

Opposition kingpin Dr. Kizza Besigye’s wife Winnie Byanyima carried out a simple poll asking whether she is capable via twitter on Thursday.

But the Oxfam International executive director was not expecting these shocking responses. 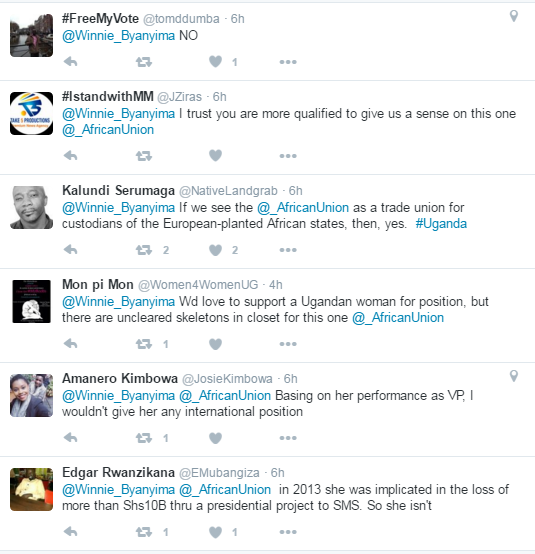 READ: BESIGYE OFF TO MEET SEJUSA IN SEMBABULE

The African Union is expected to name Dlamini-Zuma’s successor at a heads of state gathering in the Rwandan capital Kigali in July. The bloc disclosed the names of contestants vying for the job and Uganda’s candidate Dr. Kazibwe is seen as a front runner alongside Botswana’s candidate Pelonomi Venson-Moitoi.

During the past two years, Kazibwe has been sitting on the panel of the Wise of African Union.

Controversial as her life story might have ended up, nothing takes away from what the first and so far only female vice president of this country represented for the Ugandan woman and general political atmosphere. Dr Kazibwe actually opened the gates for other women in Africa to rise to similar postings. She showed that women could be taken seriously in positions of power.

She now believes that she has the requisite skills, competencies, experience that will catapult Africa’s transformation process, thus unleashing her potential to become an effective and influential player in global affairs.

Looks like Dr. Kazibwe will have to make some crisis management… sorry, not sorry!

KCCA starts registration of all boda bodas operating in Kampala