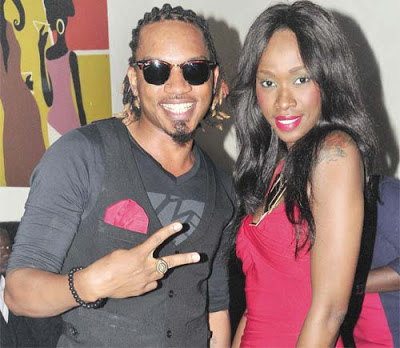 Flamboyant George Lubega Timothy aka Exodus has got pretty frank about his sex life on CBS’ Late Night Radio.

The former streetkid has revealed his magic number, kind of. It’s around the 1 mark apparently, as he admitted he can ‘count on my hands how many.’

During a segment where the host Alexander Luggya asked Exodus about the how many females he has slept with considering that married women like Judith Heard and Olga Nampiima (prefers to be called Olga Nams) keep fighting for him, Exodus revealed he got spoilt while only 13.

He branded himself an ‘early developer’ for having sex so early, and said it happened with his wife Brenda Lubega who he wedded in 2011.

Exodus said: ‘I lost my virginity so early to my dear wife and she is the only woman that knows my manhood. Judith Heard is a friend and has always been one to me.

Fans however took the insinuation further by insisting that whenever the media questions the alliance especially when the two are caught in quite compromising situations, they just pour calm on the idea. These things happen when Judith Heard is hyper, after she has had quite a number of drinks. Then she seeks for Exodus’ attention and does not let him out of sight.

Exodus who shot to fame with his Ganja Man hit when he asked people to quit smoking drugs is now promoting his latest single ‘HAPPY’ and plans to hold a  concert later this year.