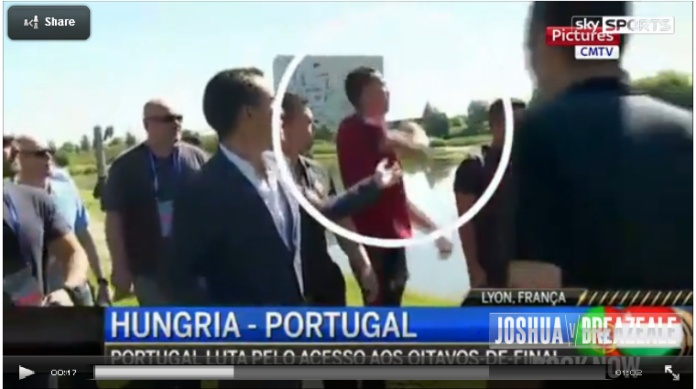 The Real Madrid superstar is clearly in no mood for talking with journalists after launching his feelings after he threw a reporter’s microphone in the lake.

Ahead of their final EURO 2016 last fixture against Hungary, the frustrated Portuguese captain was out for a walk with fellow teammates when a Portuguese journalist approached him to ask if he was ready for the match.  His response was to “Grab the journalist’s microphone and throw it into the nearby lake”.

Portugal is without a win at Euro 2016 tournament and could face elimination if they do not beat Hungary in their Group F clash.

The Portuguese National team captain has failed to score from 20 shots on goal in this tournament. He also missed a penalty kick against Austria in their 0-0 goalless stalemate draw in Paris.

It has been a frustrating tournament for the 31-year-old striker because he has failed to score in the two matches Portugal has played so far in this EURO tournament happening in France.

He also criticized Iceland for having a “small-time mentality” after a 1-1 draw.

Portugal face Hungary in Lyon, France ahead of their, MUST win final Group F fixture.

Ronaldo and Co. will face England if they finish second in the group and could face Croatia if they remain third.

However, if Austria beat Iceland and Portugal lose, goal difference will determine their fate and they could be on the plane back home by Friday this week.