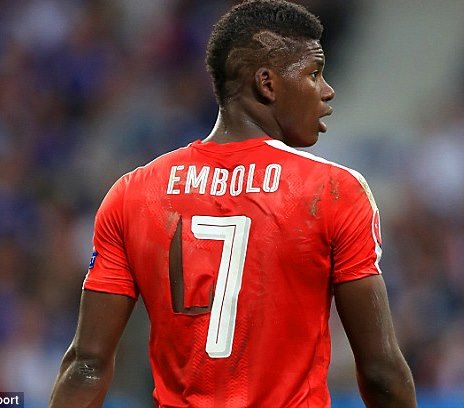 Manchester United are reportedly set to miss out on FC Basel striker Breel Embolo, with the youngster said to be close to signing for Schalke 04.

That’s according to GianlucaDiMarzio.com (translated by David Amoyal), which has stated that a deal for the forward will be done “rapidly” after the Bundesliga side jumped ahead of the Red Devils and RB Leipzig in pursuit of Embolo.

Whitney also cited Dirk g. Scharlmann of Sky Sport, who reported the player rejected the offer on the table from the Red Devils.

Embolo is considered among the finest talents in the game and has afforded the continent a glimpse into his ability with some sharp cameos at the UEFA European Championship. He started Switzerland’s last game against France, as the team secured their spot in the knockout stages of the competition.

The Switzerland international certainly possesses all the raw tools to go a long way in the game. He’s been dynamic, skilful and capable of operating in a number of positions across the front line for Basel and his national team. He has an eye for goal too, with 10 netted in each of the last two league seasons.

It’s easy to see why United would be keen, as he’d fit in well with the club’s forward options. Like Embolo, Marcus Rashford and Anthony Martial are vibrant young talents who can cause chaos in the final third. They all need guiding and refining, but the potential is there for each of them to become a world-class player.

As noted by Tom Coast of Sport Witness, with Martial operating on the left and Rashford through the middle, Embolo could take up a familiar berth on the right flank

However, at a club like United, there would be a lot of expectation on the youngster, not to mention a fair chance of him not featuring frequently, especially under a manager like Jose Mourinho, who values experience in his starting XI. At Schalke, it’s likely he’ll play a key role.

The focus will not be relentlessly trained on the youngster at the Veltins Arena as it would be at a true juggernaut of the European game. Under new manager Markus Weinzierl there will be expectations, but they will not be too lofty and thus allow Embolo’s game to develop naturally.

Schalke seem to be building an exciting side for the 2016-17 campaign, too. Alex Chaffer of DW Sports has been impressed with the business they’ve conducted under sporting director Christian Heidel.

Of course, there are green facets to Embolo’s game that need to be worked on, most notably his touch, decision-making and work rate. However, he’s shown he can be a big threat at the elite level, and provided he continues to develop as anticipated, he can become an elite forward.

United will be disappointed if the teenager has chosen to further his career elsewhere, as the Red Devils are always in for the most exciting attacking talent around. The club certainly aren’t short of sprightly strikers ready to take the Premier League by storm next season, though.