Richard Mulindwa’s powerful feature set among the in chaotic 1980s Uganda film Freedom, won six prizes at the Uganda Film Festival over the weekend, including best film and best actress.

Set in the pre-NRA war times, the film details the despicable abuse suffered by one unlucky girl at the hands of her adoptive father.

As expected, Freedom won awards for Film of the Year, Best Feature Film and Best Cinematography which came with cash tokens of Shs 20m, Shs 5m and Shs 3m, respectively.

The awards, the only honours devoted solely to Ugandan movies, proved serious in tone with more honours going to new actors and fresh talents. The 23-year-old starlet Nisha Kalema got emotional as she accepted the best actress award for her heartbreaking performance as lead character Amelia, an orphaned girl that suffers despicable abuse at the hands of her adoptive father in the thrilling drama.

Thanking her rumoured screenwriter boyfriend Samuel Saviour for discovering her, the fast-rising actress told the audience how she’s yet to come to terms with her meteoric rise having burst onto the local film scene just last year.

There was disappointment for several films, such as The Athlete by Matt Bish, Ugandan Pollock and the Robert Ernest Bbumba stared American Dream, which might have expected success on the back of critical plaudits.

Hassan Mugeye beat a strong field to be named best actor for Invisible Cuffs, a film a family man’s struggle with cannibalism. 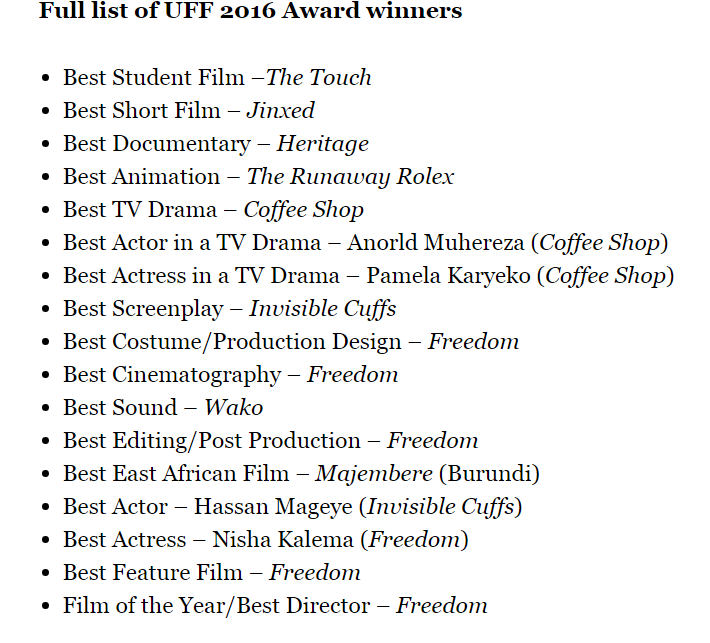