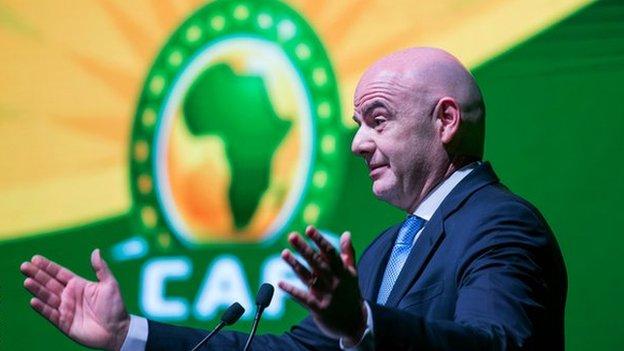 FIFA President Gianni Infantino has outlined his wish to ‘project African football to the top of the world’ that is peddled at development of competitions and infrastructure in African football.

Infantino said during the seminar held in Rabat, Morocco. It was attended by the Presidents of FIFA and CAF, delegates from each of CAF’s 54 Member Associations (MAs), African football legends, representatives from the international banking and investment industries and the media, with the aim of harnessing commitment, determination and passion of all of those involved in African football to raise it to the highest levels of the world game.

In his address to delegates, the FIFA President underlined his belief in the immense potential for positive growth and expansion of African football. “Our objective must be to project African football to the top of the world,” he said. “We have been talking about the development of African football for many years. Pelé once said that an African team would win the FIFA World Cup, but this hasn’t happened and it seems we are not making progress. Today must be the day we turn that page.”

The FIFA President then unveiled a joint FIFA/CAF strategy for the elevation of African football focused on three key pillars: Refereeing, investment mobilisation and competition development.

Refereeing will see the creation of a group of professional referees financed and organised by FIFA in partnership with CAF. “Referees have to be above and beyond doubt and to do that we have to protect them,” the FIFA President said. “We will take 20 of the best African FIFA referees, professionalise them, and give them permanent, professional contracts. They should be the guardians of the rules of our game and we must protect them and make them totally autonomous.”

For investment mobilisation, FIFA and CAF will assemble a panel of partners and a minimum fund of USD1bn to make solid and sustainable infrastructural investments in Africa, from which FIFA will ensure that this funding is managed via transparent accountable procedures. “We are elaborating a proposal to mobilise USD1bn to build at least one top stadium in the countries of each of FIFA and CAF’s 54 Member Associations,” Mr. Infantino added. “In the countries where there is already at least one very good stadium, the investments can be done in other infrastructures.”

In relation to competition development, FIFA will seek a range of new initiatives: the creation of a world nations league for women’s football, more frequent youth world championships, more youth competition categories, a re-positioning of the African Cup of Nations to be played every four years and the creation of a new pan-African club competition.

The new pan-African club competition, proposed by the FIFA President, would comprise 20 permanent member clubs and would be supported by additional clubs that qualify via regional competitions. The permanent member clubs would be urged to provide an investment of USD20m to the project annually over five years, taking their total investment to USD100m. They would also have to meet other participation criteria such as investment in youth and women’s football. In this way, the competition would have the potential to generate a revenue of USD3bn over a five-year cycle – and would also create the conditions for African football to be able to retain some of most talented players in the continent.

“We have to reflect about how we can revolutionise African football,” the FIFA President said. “I want to create a real pan-African league that would feature 20-24 clubs with a maximum of maybe two clubs per country that would still play in their national leagues but that would play during the year so we can really crown the club champions of Africa.”

The FIFA President issued a rallying call to African football, concluding: “Let us show the world what we can do. This day is special it’s the start of a new chapter for African football.”