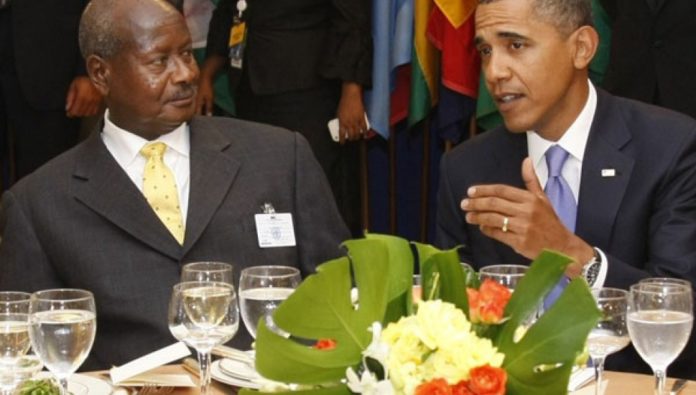 The United States Embassy in Uganda has criticized move to ban the live broadcast of opposition activities under the defiance campaign by all media.

“Citizens of Uganda should be able to decide for themselves what information to use to make informed choices about their country.”

“As we have said before, all parties should refrain from violence and intimidation.”

Uganda’s government argues that there is an injunction regarding the broadcast of defiance activities by the Forum for Democratic Change (FDC) party and that the activities spear headed by former presidential candidate Dr Kizza Besigye are only bent at stopping the swearing in ceremony of president Museveni scheduled for May 12.

Mr Museveni’s victory was upheld by the Supreme Court in March.

Media organisations have been told not to carry out live interviews with opposition members or show their activities in real time during their protests.

Warplane drills ahead of Museveni swearing-in

Besigye to Muhwezi: You are wasting time on media ban

Museveni to ‘talk’ to Nsereko over Deputy Speaker post

Bye-bye cabinet, for some we may not meet again!

According to minister Muhwezi, continuation of this so-called “defiance campaign” is illegal because it is in clear breach of the Interim Court Order issued last week.

Dr. Besigye himself has asserted that his defiance is intended to fail the swearing-in of Uganda’s President.

The opposition kingpin on Thursday told EagleOnline that Muhwezi was wasting time on defiance campaign ban as the issue at hand is about capturing power back to him as ‘the elected leader of Uganda’.

This was at in the aftermath of police and military thwarting planned demonstrations in Kampala by Besigye’s opposition party FDC.

Uganda’s armed forces have now taken over security of the city, conducting joint patrols visible all over the capital, Kampala.

Early in the morning, police surrounded the homes of top opposition politicians Besigye (Kasangati), Erias Lukwago (Wakaliga) and Moses Kasibante (Rubaga) in a bid to prevent them from joining the planned demonstrations.