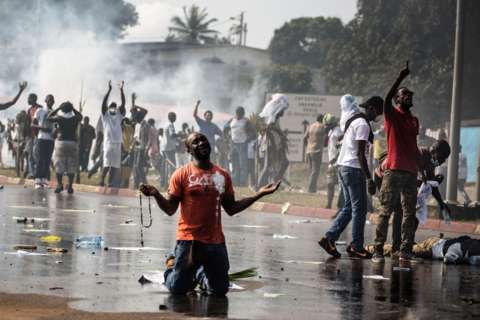 People in Gabon have been unable to access social media and internet access has been cut off according to reports.

Sarah Crozier from the European Union election observer mission, told the BBC it was hampering their communications as well: “It’s a little bit difficult for us to get information as well because the internet has been cut off.”

According to this graph from an Internet tracking site, internet access has been severely disrupted since Thursday evening, when protests broke out after the announcement of Ali Bongo’s presidential election victory.

defeated presidential candidate, Jean Ping, has told French media that he fears for his safety and could be arrested at any moment.

Mr Ping told private French radio station RMC that he had effectively gone into hiding following the violent storming of his party headquarters overnight:“I am not leaving the place where I am. I believe they thought I was at the party headquarters with the other leading opposition figures.

“I could be arrested at any moment. They’re probably trying to find me so they can arrest me… Half an hour from now, my safety could be undermined, or I could perhaps risk physical harm.”

He also called for international support, singling out former colonial power France, which appeared to back his candidacy: “We are calling for the intervention of the entire international community, the European Union, the United States, but especially France due to its historical links to Gabon… Otherwise, it will look like a failure to help a people in danger.”