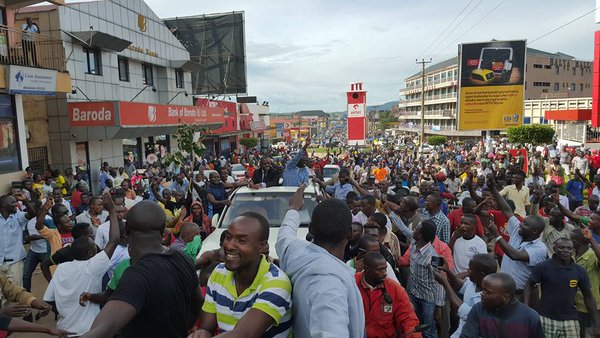 As seasoned city activists know, their colleagues in Mbarara are not simple when it comes to inhaling teargas.

The resumption of four-time forum for democratic change presidential candidate Dr Kizza Besigye’s court case in Kabale meant that business would have to standstill and indeed he was given a rousing reception in Mbarara municipality.

Women and children are visibly excited as Besigye’s care snaked slowly into the town.

The youth are dancing to latest tunes praising Besigye and the retired colonel also thanked Mbarara residents for being strong despite him failing to win the 2016 presidency.

He tweeted: People of Mbarara are even stronger than before the coup! They are ready to take their power back. #FreeMyVote.

The visibly agitated cops had planned to stop Besigye from passing through the town center only to discover he was already at his Mbarara home, ‘The Grand Holiday Hotel’.

Boda cyclists immediately rode to the hotel entrance moments later demanding to see ‘The People’s President’ and the ‘Lord Mayor’ who immediately after having lunch come out to greet the crowd.

Police had also converged at the Hotel and asked Dr. Besigye not to continue through the town past Mbarara University of Science and Technology (MUST) which is a hotbed for his youthful followers in Ankole.

Though Dr. Besigye and Mr. Lukwago seemed to oblige to Police directives to pass through the less chaotic Kizungu zone on their way out of Mbarara, the now ferocious crowd became defiant perilously throwing stones towards Police who reiterated by firing teargas canisters to disperse the group who had turned rowdy. The supporters ran in disarray but shortly re- organised and attacked police.

READ: HUMILIATION AS POLICE CONCEDE THERE IS NO ENOUGH EVIDENCE IN JOAN KAGEZI MURDER CASE

The last time they appeared before this court last year, State produced four witnesses but only the Kabale OC CID Karinkiza Gumisiriza testified, while the others refused.

The trial will proceed on Tuesday where State is expected to bring more witnesses to pin the five opposition leaders.